The CanMan* or: How We Learned to Stop Worrying and Make a Film in 48 Hours

[*The CanMan is a short film (approx. 6.55 minutes long) made by us for India’s First 48HFP Competition. The story was inspired by a real life serial killer called The Beer Man. Made on a shoestring budget by first time filmmakers, film was adjudged The Best Film of Mumbai 48HFP and is now India’s entry for International 48HFP.]

Here is a post, reminiscing the adventure called The CanMan.

The CanMan was made between 2nd & 4th May 2008, but actual story starts almost a month back when I was bedridden, thanks to an uninvited Chicken Pox attack.
There are three bad things about this highly contagious disease:

Thankfully a chicken-pox mareez can go online because online jaaney se chicken pox nahi failta..aise to pyaar failta hai.
I had no intention of spreading love online, but had nothing to do so went online, where I stumbled upon something that had something to do with my first love Films/Film Making. There was this info about a Film Competition called 48 Hour Film Project, where you have to write, shoot, post produce a film within 48 Hours. The best part was, this competition was supposed to be held during a weekend.

“48 Hours – A Weekend.. Sounds cool” I thought and called up my partner in crime the ever busy Saumin The Kickass Patel.

“Making a short film in 2 Days sounds cool re…I think we should participate..”

“But we need to have a name for the team…”

He calls back.. with a name for our production.

“What about LIMBOO MIRCHI PRODUCTIONS…???” 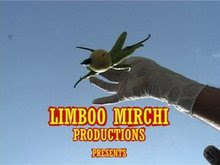 So we registered for the competition and by now I was more or less bhala changa with some 4-5 minor spots on my face. We started meeting and discussing the way we gonna approach our film. First time filmmakers, we wanted to leave no stone unturned and once all the stones were turned upside down, we realized we still don’t have a cast-crew, a location and post-production setup.

48HFP was an International Competition, and unlike Indian Competitions, here the participants were supposed to fill some hundred forms for location release, talent release and what not and had to get them signed by the team members.
To go thru ‘Bhai Tum Sign Karte Ho Ya Nahin…’process, one needs a Bhai, in our case we didn’t had a Bhai i.e. the team members. This is when we realized we have to assemble a team.

The rules said cast & crew should be unpaid. This was a huge problem for us as professionals in Mumbai religiously follow the thumb rule advocated by The Joker - If you're good at something, never do it for free.

Anyway singing Mitwa song from Lagaan, we started meeting and convincing people. Dhirendra, our music director was the first one to join the team (and last to deliver the music). Some friends (who turned out to be fiends later in the story) promised to help us with Editing/post production.

So with a team more or less in place now, all we had to worry about was the genres. There are 14 genres and its kind of a (un)lucky draw every team has to go through, one member from each team has to pick a chit from a hat & have to make a film in the genre mentioned in the chit.

“Dude..what if they give us Romance as the genre and we have to make a romantic film??”

“Oye…That means we have to have a girl/heroine/actress in our team.”

Tumhara Naam Kya Hai Basanti AKA Actress / Heroine Hunt!
It was an adventure to meet girls in shopping malls and convince them to work in our film. In a ‘Paisa Phenko Tamasha Dekho’ Mumbai, we were looking for a classy girl who can say “Main Aaj Bhi Phenke Huye Paise Nahin Uthati” and work in our film for free.

[A lesson that we learn in our 2 days long Heroine-Hunt : 90% of the girls can’t act, out of 10% who can act 90% are working with Ekta Kapoor, that means we are left with 1% and they wont entertain anybody who isn’t going to pay them.]

Anyway thanks to Aman Uppal, a close friend, who himself is an actor, we met Smiling Shweta and finalized her.
This is when Raj messaged asking if we need any help. Going by the Ek Se Bhale Do…formula I told him we are looking for an actress for our film. Next morning he sent some contact no.s.

Called up the 1st no. It was Girija. Told her our problem and she was ready to work with us..

“Can you please mail me your portfolio Girija…”

“I am the girl with Aamir in Tulip School..”

Girija is in team Limboo Mirchi.

Saumin calls up to confirm one of his Dad’s friends Bedi Uncle has a SONY DSR PD 170 Camera and we have a DOP in team now.

10:00am : We have a team and two female actors with us. This is when our post production friends ditched us. The competition is gonna start at 7:00 pm and we are yet to finalize a location and now we don’t even have an editing set up.

2:00pm A friend Devang helped us by introcing us to The Great Kanu Bhai who has a FCP set up in Andheri. Kanu Bhai agreed to help us. Meanwhile Saumin also discovered two beautiful locations (now you know why I call him Saumin The Kickass Patel).

5:00pm We are ready to go to PVR, Juhu & get the Genre, Line of Dialogue, Characters & Props for our film. (The give a Genre, a line of dialogue, character/s & a prop that one has to incorporate in the story of the film).

7:00pm We got Detective/Cop genre.

7:30pm We cracked a scratch story. 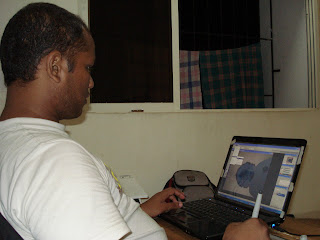 7:00pm The CanMan is submitted on time, with all the forms duly signed. (Thankfully nobody in our team had a tattoo on his/her arm & everybody signed the forms without recreating that legendary Jaao Pehle Us Aadmi Ka Sign Le Kar Aao...scene) 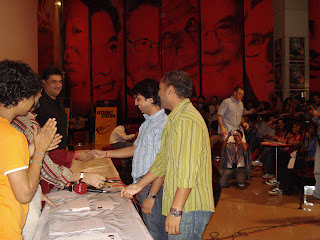 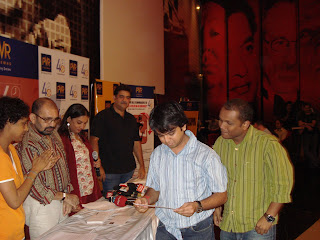 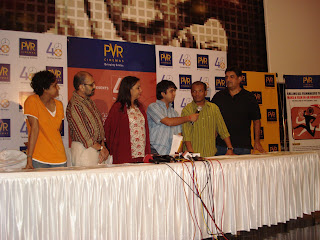 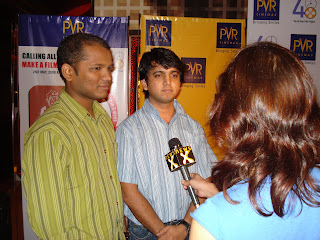 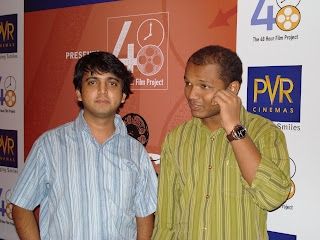 Congrats! My 8 year old (now 9) has done three 48 hour Film Project weekends. In March he became the youngest Award winning 48 Hour Director and then last weekend spent his 9th Bday doing another 48 hours. Just participating is a win and all the crazy things that come together... and don't come together is what makes it such a "interesting" experience.

This last one his team gave up when the Canon A1 camera died halfway through filming but the next day the 48 hour film Gods grinned at his team and they were able to download the footage they had taken and actually finished "filming" using the built in iSight webcam on the MAC! If you didn't have the Ahhhh moments who knows you might not have made such a great movie.
Congrats and look forward to seeing what you do for the next 48 hours :-) Good Luck at the Best of Internationals!

Hi,
I always wanted to ask you about how you did and made us all (friends and well wishers) proud. Now, I have the blow by blow account.

Life is exciting isn't it? Don;t let the spirit wane. Keep it up and may a lot more awards and public accolades come your way.

it must have been so exciting to live your dream and try and catch the dealine while at it!! :D

Thanks themommason, it was crazy indeed. All the best to your 9 year old.

@ Sloganmurugan- Thanks for your kind words.

I honestly never believed you will pull it off. That makes me even more proud that Saumin and you not only completed competing, but also kicked sumptuous ass!

The Mumbai 48 Hour Film Project is Back in Nov. 2010!
Visit: www.48hourfilm.com/mumbai to register

If you'd like an alternative to randomly picking up girls and trying to figure out the right thing to say...

If you would prefer to have women pick YOU, instead of spending your nights prowling around in crowded bars and night clubs...

Then I encourage you to play this eye-opening video to unveil a weird little secret that might get you your very own harem of beautiful women just 24 hours from now: