Hey guys, after dilly-dallying for almost six months, we started our work on Chitrakathaa - Understanding Comics: The Indian Way. 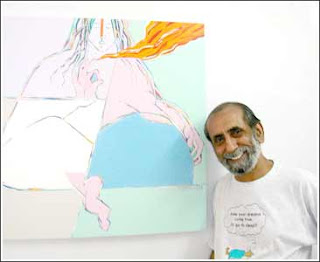 Meeting with Aabid Surti ji (creator of Bahadur, Indrajaal Comics and many other syndicated comic strips and highly popular Dhabbu ji series from Dharmyug) was an experience. Though I had an opportunity to meet him in my student days but this time it was more personal, he invited us to his residence in Meera Road and we had a long chat on Stories, Comics, Superheroes, his way of setting up a story (or Setting the chessboard as he calls it), creating a new comic book universe, creating new characters, his novels, collaboration with legendary comic book artists like Govind Brahmanya and Pratap Mulick, his fixation with the stories of Daakus of Chambal, his bollywood days, his association and experience with Raj Kapoor and Raj Khosla, his comics that were almost turned into films, his love for art and painting, his stories which were far matured and ahead of their time and current bollywood films.

Saw his Short Films and a film made on him.

Can't explain the experience, the fun and the excitement. But this was THE WAY to kick start Chitrakathaa!

Have started a blog which will be updated on regular intervals, sometimes with the updates on Chitrakathaa: The Project and sometimes with some write ups on Indian Comics.

very interesting read...wishing you all the best for your 'chitrakatha' project

Its really an interesting read.:)
All the best for your project.

Am happy u r getting to work on ur passion :) Wish ya all the success dear :)

May the force be with you! Brilliant project, I am sure it'll be a path-breaking attempt in Indian history. If someone can do it, only you can...