Despite my vow that I won’t be spending any money on DVDs/Books this month thanks to the bloody recession and some unexpected kharchas,

I couldn’t stop myself when I saw the Wall-E Special Edition 2 Disc Set released by Excel Home Videos. Loaded with tons of extra features and Leslie Iwerks’ award winning Documentary The Pixar Story, it becomes a must have for any animation/Pixar Fan/Enthusiast/Professional.

Another irresistible blow came in the form of Kung Fu Panda 2 Disc –Kung fu Master Special Edition DVD. Though this one is also released as a single DVD set and I think one should go for the single disc edition only, 2nd disc mostly contains promotional stuff which in my opinion most of the people won’t be interested in. Anyway it was heartbreaking to see they released it in without the short film– Secrets Of The Furious Five, which was specially created for the DVD set called Pandamonium Set. Why they are always biased about releasing such cool stuff in .

There was this DVD Sale going on in Mumbai and I ended up buying 5 more DVD Titles – A Bug’s Life, Finding Nemo (have lost my 2 DVD Edition), Miller’s Crossing, Thelma and Louise and Little Miss Sunshine. I decided- No more DVDs for this month, and this is when I realized they have released The Dark Knight Special Edition 2 Disc Set too. Guys it's again a must have for everybody who loved this Masterpiece by Chris Nolan, one of the smartest film of this year. The extra DVD is loaded with many Extra Features, and its coming in a beautiful Bag with a free Tee and a sexy black Dark Knight Pen.

Well I promised myself I’ll save the money next month for sure and bought this one too (this is the same promise I make and break every month when I see a new DVD). Went to Landmark yesterday and was surprized to see they’ve got The Art Of Wall-E in their books section…. 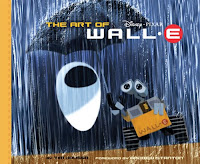 The book I have been drooling for almost 6 months and more recently was contemplating if I should order it from amazon, how could I ignore this irresistable beauty giving me that come hither look from that book shelf? I am not heartless…but yup after spending so much I am penniless right now!!

I have been/or atleast tried to be a good boy the whole year, anybody wanna play Santa???

Edit: By the way in case if you are interested in the art of script writing and screenplays, Warner Bros. have uploaded The Dark Knight Screenplay by Jonathan Nolan & Christopher Nolan on their website. Click here for the PDF Version of Actual Shooting Script.

Disney has also put up the Wall-E screenplay by Andrew Stanton and Jim Reardon. Click here to read one of the best Screenplays written for an Animation Film.

Posted by Toonfactory at 5:58 PM

wah ... a new pickpocket around when we least need one

arey do you know any more sites where they have given screenplay of movies...by the way thanks a ton for the dark knight screenplay.

can i borrow kungfu panda? plzzzzzzzzz?

Leave me in a book store and I can spend all the money on my card there... I simply cannot resist books and that's why I make people buy it for me. :D

Buying a Wall E dvd can never be wrong...:)i myself bought it last weekend...its by far the best animation movie i have seen...and even after watching it a lot of times already..im still not bored..i think wall -e and eva both r adorable:)
and as for the other indulgences..well i cant say much..i have been promising myself to stop overexpenditure for 4 years now..just doesnt stop:)

@ Arunima - Thanks a ton for the visit and comment.

@ Abhishek - There are many such sites where you can get Screenplays, will fwd U some links.

@ Harshita - Hahaha, what to do there are so many books to read and so many movies to see..

@ Santasizing - Thanks for supporting Wall-E and buying an original DVD. So U went thru all other Special Features ya abhi bhi Wall-E hi dekh rahi ho??

Thanks for those script links Aalok. Now, to get a time to read through them ... huh :)

The best thing i like about the place where i live is that the public library and the university library are full of Dvds and books, which take away lot of my daily free time and I love it.
Nice post.:)

Hahaha.. I sympathize with u.. Its a mean tempting world out there :)

Man !! Amazed by your love and passion for animation :)

I really wish to see your movie soon :)

All the best dear :)

@Rafiq: thanks for the visit man. I just finished reading TDK Screenplay...take ur time.

@Nidhi : Thanks a lot for the visit and comments!

Get professional trading signals delivered to your mobile phone every day.

Start following our signals NOW & make up to 270% daily.