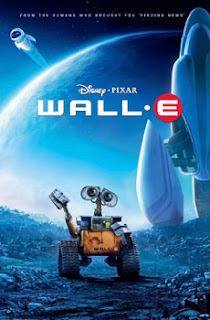 Finally they released Wall-E in . The film has become a classic within a week after its release (ranked # 29 in IMDB's Top 250 List). No point talking about the story or the animation bit of it, we all know Gods at Pixar are The Master Of The (Animation) Universe. Its of no use to talk about the movie either, as anybody can Google 'Wall-E' and find more than 53,000,000 entries (in 0.2 seconds) going gaga over Andrew Stanton’s masterpiece. As far as Pixar guys are concerned, one can’t say ‘They’ve done it again’ simply because Wall-E is so astonishing that they’ve never ever even come closer to create something as astounding as Wall-E..forget ‘doing it again’ !!

Story :Wall-E (which stands for Waste Allocation Load Lifter – Earth Class), is a cute benevolent bot (one shouldn't call him a robot) and ….. Phew....Sorry I am in such awe of the film that I won’t be able to talk about the story. Just go and watch it guys..JUST WATCH IT!!!

Characters: Wall-E has a bunch of delightful characters who will sweep you off your feet with their mannerisms. Hal (Wall-E’s roach pal, the name I guess is a tribute to vintage comedy producer Hal Roach) is so adorable that girls are going to fall in love with cockroaches and then there is a fauj of cute-bots (I personally find cleanliness freak M-O (microbe obliterator) the cutest of the lot) 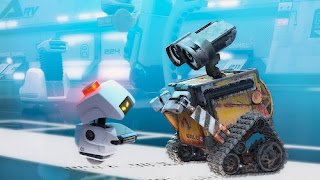 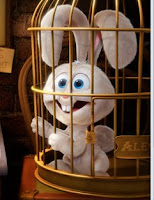 Join the fun filled roller coaster ride with Wall-E and before you realize you will be rooting for him & his gang.

Don'ts: Please don't watch it in Gold Adlabs,Kalyani Nagar (Pune) or any theater/multiplex which is not showing Pixar Short 'PRESTO' with Wall-E. And before you book the tickets please check if the theater has that outdated sound system like Gold Adlabs (because they aren't worthy enough to play Wall-E's musical sound effects).

Posted by Toonfactory at 1:59 PM

Oh good. I'm definitely going to see this one.

too many movies to watch!! and saasu ma doesnt like animated flicks!!

@ Banno - Don't miss it!!
@ Abha - Yup all these movies are unmissable. Jugaad lagao aur sab ki sab dekho aur ye mat bhoolo Ki Saas Bhi Kabhi Bahu Thi ;)
saw Wanted on Friday, will go for Rock On with the usual gang of Idiots so have to wait till I reach Mumbai.

Will watch it soon :)
All I need is to bribe someone to watch the movie wimme... none of my frenz in Pune like animated movies :((((

Though thanks for the advice :)will refrain from watching it in Gold Adlabs...

Me too eager to watch the movie. Have been reading good reviews about it and plot looks all the more interesting.

By the way, Thanks for linking me up in your site. It means lot to me for keeping up the passion.

frankly, i liked Presto a lot lot more than Wall-E. only comparing between these two. Presto had the missing element where Wall-E floundered-- humor and magic. Maybe i need to watch it again, i probably went in with extra high expectations. But I felt while Wall-E scored in once again producing unreal animation (so real that you suspect it is not animation!), it took the tribute to Kubrick's 2001 too far. Eventually, it turned into a modern sci-fi masterpiece but sacrificed that magical "something" which made Toy Story, Incredibles, Ratatouille and even Stanton's own Nemo endearing re-viewable gems.

The "a-ha" factor was missing. or maybe, as I said, I just need to watch it again.

PS: I stopped trusting IMDB ratings since the day an average movie like "The Departed" shot up to top 10 (even his own Goodfellas was better!)

There should be a law against moron distributors who edit and cut movies randomly. How can they not show "Presto"? It's part of the Pixar experience!!!! How can they chop end-credits in Bangalore theatres??? How can they delete key scenes to squeeze in more shows??

Can we invoke RTI or POTA or Emergency or something on such evil theatre owners??!!

@ Vidooshak- The random edits and chopping off films is something that should be banned...went for Wanted and they edited almost 5-6 minutes of the film to squeeze in Singh Is Kinng....
BTW so called original DVDs also are into this Dirty Habit of Editing (sometimes most vital) scenes from films...Bought Coppola's Dracula and they chopped off every scene where they showed Dracula's Wives...same was the case with Babel(can U bel. they edited the climax)...
Many people dint like Wall-E that much, and most of them felt that the Fun-Element was missing, but I think sometimes subtle emotions/ reactions can be humorous too...(remember EVE's shooting)...its a classic Smile Vs Laughter debate I guess...
Presto was funny...sach mein

it's nice to know how the world is reacting to wall-e. a loto f film-makers believe it is one of the best pixar products - whilw many still believe it does not have a repeat-value and that the humanoid part is boring.

pixar is surely an awesome place...people are good at what they do. but ;et's open our eyes to see it's not the ONLY big name among animation studios. there are many many others. we should stop going gaga only about one thing. there is so much 'else'

@ Sonia - Yup true...there is so much 'else'...I really love European Animation a lot...recently saw 'NOCTURNA'(which was designed by one of our fav artist Enrique Fernandez) and loved it :) Persepolis and Les Triplettes de Belleville are my all time fav. animated films...then there is japanese animation, I m a big fan of Mamoru Oshii and Miyazaki films as well :)...
(but just because there is so much 'else' we shouldn't stop ourselves and not appreciate a brilliant film like Wall-E??should we?)