The Weekend That Was

When it comes to weekends, I think I am one of the biggest followers of Calvin. But this weekend wasn’t that great, as I spent it doing few things that weren’t ‘completely’ pointless.

After a long long time I spent sometime sketching, it was great to be back (after almost six months) to my otherwise ignored sketchbook and doodle. (I am planning to upload some of my recent sketches here someday despite a friend suggesting me not to do so.)

Besides sketching I saw two great movies over the weekend.

It was a pleasant surprise to find a DVD of T.P Agrawal’s 1996 Classic- ‘Return Of Jewel thief’ in Mumbai’s Landmark (they have an amazing collection of films, not so long back I bought Joginder’s Masterpiece Pyasa Shaitaan from Landmark).

The cheap looking poster on the DVD Cover made me nostalgic (as a school boy I had seen ROJT in New Basant Theater, Bhilai),this rare DVD is my prized possession now. 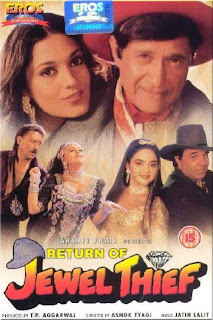 Return of Jewel thief, directed by Ashok Tyagi is a sequel to Dev Sahab’s film Jewel thief (1967) directed by late Vijay Anand Sahab. The story of ROJT starts exactly 27 years after its predecessor, when Jewel thief Prince Arjun comes out of the jail and we are astonished to see a well organized gang waiting for the boss after 27 years. (looking at the gang you can easily make out most of the gang members must be toddlers when Prince Arjun was sent to jail)

It was a treat seeing three “self-proclaimed” evergreen superstars, (who have refused to age eons ago)- Late Evergreen Star Ashok Kumar, Everyoung Dharam Paaji, and Main Solah Baras Ka Dev Sahab together on screen and then there were Shilpa Shirodkar (looking at her in the film one can make out what blown out of proportion actually means) and Main Nashe Mein Hoon Jaggu Dada dancing to ‘Hum RD Burman Banna Chahte Hain’ Jatin-Lalit songs like – Aye Meri Jaanam Pyaar Karein Hum..Mausam Bada Hai Chulbula…Gulgula Gulgula Gulgula..

As the film is called Return Of Jewel thief, there are gems scattered all over, whether its the performances by the legends or the music or the dialogues, they all are gems… classic in every sense.

Some dialogues deserve a special mention so here they are-

Dharam gives him a confused look…

His Waqil knocked me for six again by giving a daleel in the Adalat that his Muwaqqil Jukasso can’t be put up in the jail as he is suffering from…Hold your breath - LYMPHOSARCOMA of the INTESTINE (the most trendiest disease in Bollywood since its debut in Hrishikesh Mukherjee’s 1970 classic Anand).

Ashok Tyagi deserves a round applause for making this multi starrer unforgettable by casting Ram Sethi (he has a page dedicated to him on wikipedia), as the sleeping Bar Manager in Gulgula song. Sethi sahab (commonly called Pyare Laal ji) was one of the most glorified extras from 70s & 80s Amitabh Bachchan Films. Remember him singing Kaun Kisi Ko Bandh Saka in Kaalia..Kaalia..Kaalia (1981).

I’ll highly recommend this film to all you TRUE Bollywood Fans out there. Do watch ROJT and trust me Gulgula song is gonna top the play count on your iTunes and iPods like it has topped mine. Click here for THE song.

Second Film I saw was Butch Cassidy and The Sundance Kid (1969) – After seeing Return Of Jewel thief..I find nothing worth mentioning or remarkable in this Paul Newman, Robert Redford starrer. 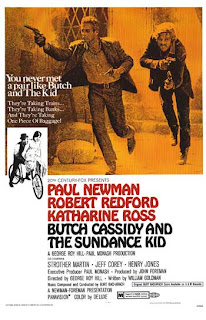 The film has won 4 Oscars (including one for Best Writing, Story and Screenplay Based on Material Not Previously Published or Produced)..It has wonderful cinematography, brilliant performances, great dialogues, amazing editing...and Ranks 147 in IMDB’s Top 250...so what?? Can it beat the Bollywood classic ROJT?

Anyway by the time I finished watching Butch Cassidy and the Sundance Kid, the Sunday was over.

How bout posting your latest sketch on the blog ?

Since Dev Saahb is Vinay, am sure he will always be dashing, charismatic, energetic and SINGLE ;) even when he will be 185 yrs of AGE ;)

Well that was a nice lazy weekend u ve spent... and all I have for u is !! You really have lotsa patience to tolerate a movie like ROJT.....

And yeah !! Calvin's rule holds true for me too :D most of the times :)

haha...I am rolling on the floor...that was quite an honest review...believe it or not I have seen this movie...way back when it released on a VHS...then it was the era of VHS...no dvd players...And I do remember cringing and laughing at the same time... those days I used to watch every movie... nowadays even though I want to...cant due to various reasons.... btw I must say that its the best way to spend a weekend :0

some time back i had purchased a DVD from Mumbai...which had 5 movies. One of them was 'Bhool Bhulaiya'....and alok i must say it was funnier than the original version....this version was recorded in the theatre - and it had all the comments and thilwe-panthi that we hear from panwale bhaiyaas sitting in the theatre.....the original dialogs were lost in the second comedy...

ROTJ...Jesus..you actually watched it?I am really really amazed at your patience ..its one hell of a task..and you did it...
Standing ovations....
Calvins ruke-they apply to all..they make so much sense...
And hey hey hey...what about your sketches?posting any new one herE?

Mr. Patappa who sits next to me asked me "Abha are you laugjhing" because i was lauhing so hard that i was wiping my tears!!

awesome stuff alok!! now i am really waiting for you to get to Goa!!!

Saari chai girva di tumen keyboard pe!!! You posts are generally good but not laugh-out-loud funny. By the time I reached Dev Saab's second dialogue, I was sputtering in disbelief. You either replayed the DVD many times or paused it every few seconds--- how did you get the EXACT dialogue so well? Seemed as if Dev Saab was talking thru the screen. Make sure you get the disk to Goa and I will get Rajni's "Faulaadi Mukka" (precursor to Devgan's Jigar)

BCATSK is an overrated movie. It has none of the time suspension (27 year old gangs), crime record (34 mulkon ki pulisss) or slime balls (a 130 year old villain) like ROJT. Plus the ending sucks (and heroine doesn't... hahahaha... chheeee).

sometimes calvin's views seem to be too profound to be a 6 years old's nay? but innocent at the same time! god that kid and his stuffed toy crack me up all the time!
haven't seen either of the movies you've mentioned.. but the review was lol!

@ Trinaa - I think Calvin is the best spiritual guru in the world..we all stick to his philosophies.

@ Nidhi - I think Wall-E won't be lonely on earth, there will always be a Baa & an Everyoung Dev Sahab there on Earth accompanying him even after 700 years.
Will post sketches soon.

@ carpe diem - Hehe..Its strange but most of the people I never ever imagined would even know such film exists have seen the film either in Theater or VHS. Its a classic.

Santasizing...Fantasizing - Trust me it was fun watching ROJT, you dont need any patience to enjoy this masterpiece.

@ mama - mia - Hehe thanks...we are planning Goa Trip..hopefully we will be there by the time U guys reach :)mil kar discuss karenge films ;)

@ Divya - Calvin is a philosopher trapped inside a 5 year old...so all his philosophies are gonna be innocent. BTW U should see both the movies ASAP.

and yea, that makes a perfect weekend, provided u had some gud food along with the movies !

Calvin is the new Einstein.

@ Bubbly Vodka - I think its the other way round - Einstein was the old Calvin...or we should say Einstein was Calvin even before Calvin became Calvin...

there is already one more nidhi following u.. lol.. any ways..
waiting for ur sketch and did u draw or paint tht embarrassing wala pic on ur previous post???

what poignant timing to mention Paul Newman. i recently saw his "Verdict" and noticed, sadly, how he was reduced to a caricature of what he once was. it was an OK movie, but PN is (was) capable of so much more!! am sure "Righteous Kill" would have merely silhouettes of Al and Rob in the same way, although i haven't seen it yet.

Just noticed your edit. Yup, may he rest in peace.