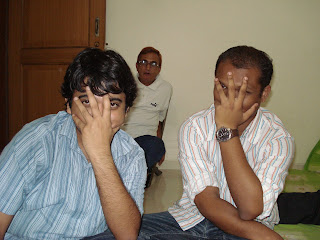 As promised earlier, here is our first attempt at film making. Though we wanted to re-edit it, add some deleted scenes and do lots of touch ups before putting it on a blog or youtube, but I think we can show you the cut submitted for the competition. So here it is...

Posted by Toonfactory at 1:07 PM

FANTASTIC !! man really luved it ..hope u get on to make the next film real soon ..n next time not with a 48hr constraint ..
n Saumin ....solid performance dude ...very nice ..
alok u too acted damn well ..
congrats to all who worked for this:)
cheers:)

I hope you remember what happened with SRK when he imitated Manoj Kumar ;)

And I must say you ve done a great job... Mr. Detective and Mr. Canman Rocked !!

So we've had a Karamchand with a Carrot, A Raja with Rancho.. the monkey , Anil Kapoor with his fruits in Race and now we have you, Mr. Detective with the comic books ;)

Wish you all the very best for the competition :)

Hey Alok, Nice blogs... It was so good to hear that u associated ith Film Production.. Loved your 48 hour Short film concept.. THough I still need to watch the video..
Congsss... for grabbing awards....
Kepp Posting :)

@ Abhi - Thanks Bro. Have some stories ready..lets see when we get time & freedom to tell'em :)

@ Nidhi - We weren't imitating Bharat Kumar...It was just we weren't happy with the film so...
& BTW the guy who played Detective Vijay has a massive collection of comics....

@ Paaro - m not associated with Film Production as of now (But would love to get into it)...it was our first attempt at film making actually, hopefully we'll get to tell better stories soon :) U into production I guess??what are U upto these days??

The Can-man. Reminded me of CID. Honest. My husband and I were addicted to it. Short and cryptic. I expected a rib-tickling twist in the end, but it ended CID'ish:(

Yes, it did remind me too of the TV series CID. Good job.

Now time for some disscection.

The story was nice, but I felt that that Buri nazar dialogue should've come at the very end.

Liked some of the camera angles, especially the one of the Sony mobile phone.

Some of the transitions were unnecessary but then a couple were great. I believe that transitions should either be out of the world or very simple, the in-between stuff don't work.

The camera movements, though it appeared that it was made deliberately jarring, looked more accidental. And some finer editing was needed.

It is quite easy for me to watch and comment, but indeed you guys should be applauded for the effort. I always tell my friends that I would do this and that, but never do them. You did it.

Very nice :-) But where were the weeping Maa and the orphan? Ha ha.

Am sorry Alok, am responding to a comment on your post before you did the honours, but couldn't control myself :D

If there would be a weeping maa and an orphan.. then the production house name should be "(K)limbu and (K)mirchi" Productions :D

The CanMan is interesting.
The Directors are...directing.
We wouldn't know which one you are, but we are certainly intrigued...
We also derive an odd pleasure from flattering comments and would like to thank you for yours.
Presently, we are going to stop writing in the royal pronoun.
Nice writing, the humour is much appreciated.

@ Indianblogger – Thanks. We’ll try not to disappoint you with a CID-ish climax next time.

@ Soumyadip – Thanks Dude. Now that’s what I call a feedback. Some transitions even I feel were bit amateur and childish. (I bel. in simple transitions myself.)
Thanks for the comments…they gonna help us while we shoot n edit our next film.

@ Trinaa – Thanks for loving it. We are trying to improve with our next film..

@ Memsaab – Ooops..wish we had access to more actors (if we had I would’ve asked one to replace me and act well in the first place though).

@ Trillian – Thanks for sparing time on my blog Her Highness :) we are..I mean…I am honored ;) and thanks for the appreciations. BTW I am the guy on the left in the pic & playing Detective Vijay in the film..Hope therez no more confusion..Keep visiting

Btw thnks for droppin by my blog.

Very filmy! Some parts reminded me of the SONY CID series. Good effort. Although I felt the story could have been better, and the editing tighter. Cheers.

I got the link from indianblogger (7th comment), watched it, and then showed it around. Some liked it, some disliked it.

I liked it and the guys that I thought would like it liked it.
Keep going :)

@ Mez - Thanks for the visit

@Bubbly Vodka - Thanks for the thoughts..lets hope our next film is going to be more enjoyable for you with tight story and edits.

@ Aqua girl- Thanks for the visit..

Hey Alok, Sorry yaar replying so late...
No i m not into productin... I m innto a different profile..which if i explain will take up lot of ur blog space..
But yeah if u plan to open a production house.. I would love ot be part of it.. I can handle Publicity and Markeing part of it...:))
And long time...post a new blog..