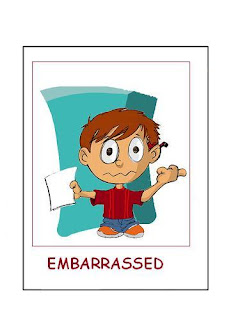 (A cartoon I made long back for an old embarrassing story)
Prologue: After delaying it for almost a month, I bought a new mobile connection and a cell phone last week.

Getting a new phone number esp. if you are going for a Reliance Connection (like me) is a big headache because you have to buy a new handset for the connection and you can’t copy your contacts directly to this new handset as it doesn’t supports any other SIM but only the Almighty Reliance SIM. Now think about the efforts put into copying all the contacts manually (not to mention one by one) from your old cell to the new one and then informing everybody about the new number. Tough…isn’t it?

Anyway the number was yet to be activated and being more or less jobless over the lazy Saturday afternoon I decided to explore my new phone…a loyal Nokia user (have never used any other brand ever) I went through the cool and some not so cool features of this new LG Handset of mine.

And this is when the story starts. I was going through the very different looking Message features and this thing called SIGNATURE caught my eyes. (Hardcore Narcissist that I am) I wanted to check the length of a SIGNATURE and typed in My Name, there was still some space…I added Detailed Designation…I could see some more space…typed in the company’s name…there was still some space but I got bored and started exploring other features.

Sunday the number got activated and I typed a message informing everybody about my new number and sent it using the cool send to all function, which saved a lot of efforts. I was happy oblivious of the fact that the message went to almost 400+ people on my contact list with the same Super Obnoxiously Narcissist Signature that I typed there on Saturday.

Once I started getting replies (some sarcastic and some full of winking smilies) Congratualting me on the Post/Designation etc etc from some close friends, I realized the blunder, but it was too late, as the message was delivered to almost everybody by then.

I IM-ed a friend asking if she got my new no.

‘where u’ve signed off with a huge signature’ she replies.

I narrated the story to her and I could actually see her laughing out loud when she typed lol.

I again narrate the whole story (A big thanks to the man who invented ctrl+C, ctrl+V)

‘Who sends a message with such Signatures…’ I type.

‘Ya exactly no one would do that except you...’ (I know he is having fun at my expense…even m smiling)

‘Cummon…once i was typing one sec pls to a girl online and by mistake i typed one sex pls… and you imagine what i had gone thru’ He shares his brief moment of shame.

‘Ohh that’s nothing…once I was chatting with a girl and I had to type- Are U busy
By mistake I typed- Are u busty, because T & Y are adjacent keys on keyboard..’

Giving it a second thought I won’t mind an award as I am hands down winner when it comes to True Embarrassing Stories. What do u think?

P.S. Don’t forget to check out Saumin’s Blog, which he updated recently with the amazing comic book pages he did for Virgin Comics.
Posted by Toonfactory at 7:19 PM

hilarious!!!over the top!!!!
and i thought only i was the master of accidents:-)

By the way...I have added you in my blogroll :)

Well I would say that this is the price one pays to change the brand loyalty ... it is a crime to think of any thing else apart from a Nokia.

Proud ownner of Nokia N72, although it hangs up a lot these days.

@ Paaro - Thanks for blogrolling me. I am honored :)

@Santasizing Fantasizing- We all are masters of accidents I think...

@ Trinaa - I think there can be two Experts on the same subject..Nahin?

Owwww !! One more victim !! I know how painful oit is to shift to Reliance and Tata Indicom Networks :((

Welcome to the gang buddy !!

Hihihihi... I can see how much help you got from Ctrl C and Ctrl V :D

Man !! Am in my office and laughing out loud.. and people around me are thinking that I ve gone mad :P All thanks to you Alok !!

And oye !! Mind sharing the award of Mishaps with me :D I know I will have to give ya some proofs... wait for sometime and u ll get a long list of mishaps that have happened to me :D

oh.. hahahaaaa.. that was very entertaining.. must be so much fun for ppl around u :P

@ Shruti - Yup it was funny for them indeed.

@ Gauri - Thanks for the visit and comments.

Lol. Seriously, who sends text messages with a signature! :p

Clap for ur sketch!!! keep going.
i dont sketch but i love editing pics on photoshop.. ;)