Ahhhh Finally....I am done with all my pending work in time. The most scary bit was Financial Planning and Tax Declaration stuff, which I somehow managed to do in time and now I am all set to go on my most awaited (can I say 'well deserved') Vacations. It's been almost one and a half year since I went on a Chhutti.

I'll be leaving for Chennai early morning tomorrow and as soon as I am back, I will be packing bags for My Long Awaited Rajasthan Trip. I might/might not be able to check my mails/comments/messages in between. So all of you who believe in V Day - A very happy Valentines Day. Those who don't care, a Very Happy V Day to you too. Those who are planning to send Pink Chaddis to M.Muthalik (Thanks Abha for introducing the Man & the mission to me) send him one on my behalf. Those who are getting Pink Chuddies, Bhagwaan Ram Unhein Sadbuddhi De.

Poem of the moment : One of my most favorite poems 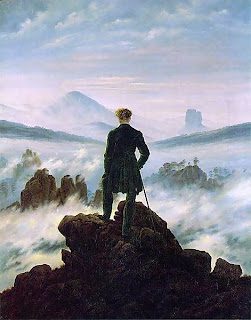 (Image: The Wanderer Above The Sea Of Clouds by Caspar David Friedrich)

Chalte-Chalte:
For Indian Comic Book Lovers - Here is an interesting article in Time Out Mumbai on Sunny The Super Sleuth- The early 80s comic book series where Sunil Gavaskar played a Superhero. Besides I have started a Chitrakathaa Group on Google Groups here, you can join it and discuss/share your favorite Comic Books/Characters/Superheroes etc.

For all you Animation Enthusiasts and Professionals, this one is a must read: Design With A Purpose - An Interview with Ralph Eggleston.
Oscar Winning Director*/Wall.E Production Designer Ralph is interviewed by Ron Barbagallo, Director, Animation Art Conservation.
(Ron was genrous enough and permitted me to post a link to this wonderful interview on my blog.)
*2002 - Best Animated Short Film - For The Birds

For those who love cute posts and lovely baby pics, check out Abha's Blog.
Posted by Toonfactory at 7:32 PM 11 comments:

Last weekend I met Jaidev after almost three years. We went for Dev D, which IMHO is one of the best Indian Movies I’ve seen in a longtime. Only thing I disliked in the film was the interval. Adlabs, Pune was playing Delhi-6 songs in the interval, which started another very interesting (atleast for us) conversation on music. They were playing the 8 minute 42 seconds long Arziyaan from Delhi-6 sung wonderfully by Javed Ali & Kailash Kher.

“You know there is a glitch in this song, exactly at the 2nd second of 8th minute, which wasn’t corrected and the song is being released and played with the glitch,” He told.

I played the track as soon as I reached home to find this not so prominent glitch in the song exactly at 2nd Sec. of 8th minute of Arziyaan.

But this is not the first time when a glitch has passed from a music studio to the final released tracks. Swades, which is one of my most favorite A.R.Rahman Albums has one such glitch in the Shehnai Version of Ye Jo Des Hai Tera, if you have heard the track carefully the Shehnai player (if I remember correctly it’s the Great Bismillah Khan Sahab) caughs exactly at the 59th second of first minute, the cough never got edited or removed from the track (knowingly or by mistake, we don’t know). This cough is very prominent in the track.

Another song I remember with a glitch has a funny anecdote about it. The song is Piya Piya Piya Mora Jiya Pukare from 1955 Kishore Kumar film – Baap Re Baap. Music- O.P.Nayyar.Lyrics- Jaan Nisaar Akhtar (Javed Sahab’s Father). This song was recorded in 50s, the era of one track recording, when singers used to sing in a soundproof cabin and live music played by the orchestra was also recorded simultaneously. Asha ji & Kishore Kumar were recording for the song and by mistake Asha ji jumped in with an aalaap in Kishore’s lines. This was a massive mistake, O.P. Nayyar was just gonna stop the orchestra to re-record the whole song from scractch. Kishore waved from inside the recording cabin and recorded the whole song.

KK came out and laughed at restless Nayyar.

“I am the ‘Hero’ of the film and I know how I am going to cover this mistake, don’t worry,” He said.

Nayyar wasn’t convinced but the song was recorded and released with that one minor mistake on KK's insistence. This song became one of the most popular songs from Baap Re Baap. Film was released and when O.P. Nayyar saw how beautifully Kishore covered the mistake on screen, he just went to the 'Hero' and hugged him.

On a totally different note, here is Sintex Water Tank – Permanent Ho Gaya commercial, where yours truly plays a blink and miss role of the Dulha (thanks to an actor who ran away) in the begining of this commercial - My first PAID acting gig ;)

DNA Mumbai has a story on our latest...(or shall I call it second) 48 Hour Film - Adtalis Ghantey, which covers snippets of the troubles Team Limboo Mirchi went through while making the film.
Read it here

Posted by Toonfactory at 2:10 PM 8 comments: