There was so much to say and so little time that I had to write and delete several posts before I realized its more than a month since I updated my blog. 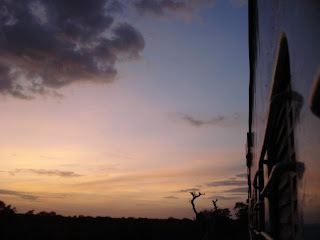 Har safar Ek Nayi Shuruaat
Without Neeshank none of these stories would've been as interesting and fun filled as they are. Neeshank was the 'driving force' behind all the fun we had in Delhi and otherwise too...

SP and his tactics to safeguard the luggage was another funny addition during our South India visit. 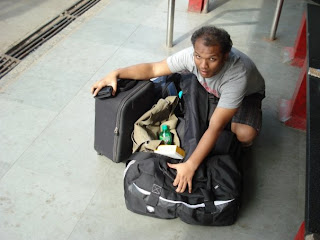 I can't thank Amrit & Amol enough for making our Delhi visit one of the most memorable experience. With all the Hawabaaziyaan we did there (check out the size of Mango Shake), we almost forgo 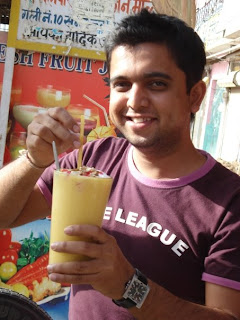 t that Delhi isn't our hometown and we are actually out of home.
Bangalore Trip was more like a deja vu. Having spent a considerable time in Bangalore (back then it was called Bangalore), it was nothing new for SP or Me. Besides we were roommates for such a longtime that throughout on our way from Station to Mayunk n Abha's, we felt like we are going back from some friends place to Mrs.Pinto's at Brigade Road. Bengaluroo trip became zimbly subaarb, all thanks to Mayunk & Abha ki Mehmaannawazi. I so wanted to steal Mayunk's treasure of old comic books but before I could do that, Mayunk booked our return tickets and we had to leave Bangalore..oops...Namma Bengaluroo. But on our way we raided Blossoms and bought some superb comic books from there. 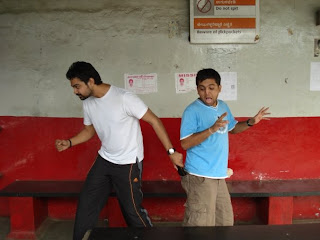 Neeshank & Me
Our trip from Bangalore to Chennai was really eventful. In true Indiana Jones fashion, we fought rogues (in this case the rowdy travel agents), deciphered codes to unearth a mysterious platform (no. 14 B) made by some mysterious civilization at Kempegowda Bus Terminus, just to get a Bus (which plays some trashy 1980s Kannada Movie on its way which none of the passengers wanna see, on its way) to Chennai. 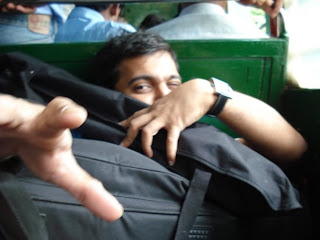 On our way to Kempegowda Bus Terminus 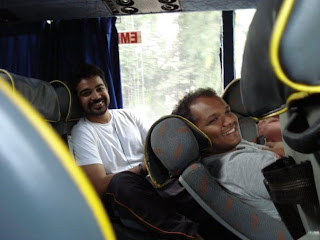 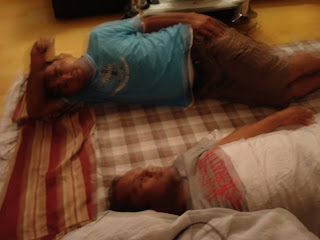 Poochho Na Kaise Maine Rain Bitayee
Chennai was pure awesomeness. Spent the night on the floors of a friend's office, which was a true 'Kasam Se Mazaa Aa Gaya' Experience. The next morning after having a delightful brunch at Sarvana Bhawan, T Nagar, we met some real cool people and after buying dozens of DVDs from Burma Bazaar, we returned back to Pune the same day. Our journey back home could've been a disaster, if we wouldn't have met this awesome TC, who 'helped' us out and we got an 'upgradation' to 2 Tier AC wunnly for wunn naayiitt!

Other trips and meets were awesome too, but I think Sabka mention kiye bina kaam chal sakta hai...so what I will mention here is THE GIFTS!
Somebody (I would love to mention the person's name, once I am allowed to do that) gifted me 200+ Indrajal Comics.
All the publishers I met gifted me massive bunches of comic books. My greed made me buy another bunch of comic books from all of them and every time I returned home from any trip, I had another carton full of comic books with me.
Bunty sent me his collection of Comic Books (easily 500+). I was going through the comic books last night and was getting all nostalgic about the years when I used to run a Lending Library with Bunty, where we used to share even an athanni and our fights on these comic books, almost every book has a personal memory attached to it. I can't thank him enough for this.

I am yet to start reading the comic books and books I have acquired in last one month.

I also wanted to write something on some silly mistakes I noticed, while I was travelling -

Number 1 is the trailer of Kambakht Ishq: where they play the Mantra - "Mangalam Bhagwan Vishnu, Mangalam Garudadhwaja, Mangalam Pundrikakshah Mangalaya Tanoh Hari" along with the text on the screen... I was shocked to see 'Mangalam Pundrikakshah' wrongly written 'Mangalam Kundrikakshah' going on air unnoticed by so many people. This one mistake changes the meaning of the Mantra and nobody was actually bothered about bringing this to the Director's/Producer's/Media's notice. STRANGE!!!

Second is a DVD released by Shemaroo: 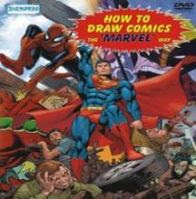 How To Draw Comics The Marvel Way, which is based on the very popular book by the same name by Stan Lee & John Buscema. It was a pleasant surprise to stumble upon this DVD at a Planet M outlet in Mumbai. But I was shocked to see DC's Superman on the cover of the DVD which will teach you How To Draw Comics 'The Marvel' Way. I would love to see Stan 'The Man' Lee's reaction on this cover. I think, we need a serious 'Comic book Education' in India. Nevertheless, despite the blasphemous cover, the DVD is an awesome product and a must have for every comic book lover/creator/'self proclaimed' creator. Check out the videos on youtube here.
Posted by Toonfactory at 2:43 PM

That sounds like an exciting tour-de-India trip, Tf. Spending a night on the floor, Drinking a Mega-Glass of Mango Shake, hopping off trains and buses, meeting those with the collection, and even getting some to add to yours... man I wish I could live that life too, to take a break sometime from our regular day-in and day-out jobstuff :)

By the way, that Superman on Marvel DVD was a laughing stock. I wonder, when would they start treating Comics on its own right path... Your docu seems to be the only savior at present bro. ;)

Keep those updates coming in :)

You have no idea how much some people envy this awesome journey you guys undertook. This in itself was worthy of a "Yatra" style documentary!! Good luck with the Chitrakatha.

By the way, now I know what makes you the great guy you are-- met the source and the tributary on Sunday. It was an awesome feeling to see simple, zero-ego people just come share your joy even in today's tit-4-tat duniya. Maa (... and papa and behena) tujhe salaam!!

Well,Alok it seems a dream come true when i think about your journey.Searching comics and meeting persons who created them is just like a person living all moments for himself only....no office,no deadlines,no wahi bakwas/beswad routine and no khich-khich of beewi...:o)
Few times i also have made such journeys in search of comics where during travelling in cities i kept my eyes wide split open to catch any glimpse of any footpath comic vendor or any old book shop in the way.The sole and prime mission was used to be comics and comics only.

last sunday i bought couple of them in bangaloru. thats all i can get.