After working round the clock for more than a month (without a single day break), life has started settling down.

May of the new year is almost half over and before we know it will be June.

June means- I'll be completing my one year with BIG Animation, one year in Pune, one year of many new things. Anyway, I'll be taking a month long (unpaid) sabbatical from work this June.

Have lots of unfinished stuff to work on and hazaar other things to do in June. I have been postponing almost anything and everything to June. Things are getting added almost everyday to the to do list, which means June is going to be a little tighter month for me.

Have loads to read & write. Unable to decide from where to start. I hope by god's grace I'll be able to sit back and plan things properly before June. 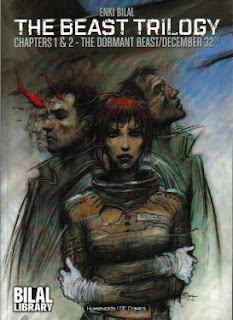 Meanwhile:
Finished reading first two chapters (Dormant Beast & December 32) of Enki Bilal's Beast Trilogy.
Bilal is a master of sci-fi fantasy graphic stories, all his stories have a very strong emotional central thread which makes them stand apart from other sci-fis.
This trilogy was later converted into Beast Tetralogy with the release of fourth installment in 2007. The two chapters I got to read were collected in Bilal Library imprint of DC. I am desperately looking for next two stories as the story was getting interesting when the book ended with a cliffhanger climax!

I was looking for more of Bilal and finally downloaded Bilal's movie Immortel (Ad Vitam) based on his 1980 Graphic Novel The Carnival of Immortals. (Disclaimer : I don't download a movie till it's available, but Immortel is almost impossible to get anywhere). I have heard a lot of good and some not so good things about the film. I am yet to see the film so I'll keep my mouth shut till I see it.

Other books I am reading are:
Ashwin Sanghi's The Rozabal Line. If you are a sucker for conspiracy theories, ancient cultures & civilizations with a lot of factual information hidden in fiction, this is the book for you. I am loving the research which went behind the book more than the story of the book.

Just saw Disney's Jungle Book (which is apparently the last movie supervised and produced by Uncle Walt). I liked it in bits & pieces. Disney's Animation is always of superb quality, but I wasn't very happy with the way Disney took liberty with Kipling's classic story.

After too much of naatakbaazi, which includes rubbing toothpaste on the scratched DVD, I got to see The Lion King on my Laptop & I immensly loved the movie, some of the sequences are simply mindblowing! This movie (and all the naatak, that went into getting and seeing it) deserves another post!

PS. Planning to get enrolled for Symbiosis' Diploma in Creative Writing in English course. Let's see...

Came across this wonderful blog on Golden Age Comic Books with a lot of Frazetta Art!
Posted by Toonfactory at 4:19 PM

Good reads, and Good watch.... I also look at the piling books on my shelf which I haven't even flipped few pages yet.... need a month off to clear all those stuffs for myself too.

You are not alone on that my friend :) You have me for company, and I assume there would be many more out there :)

Ahem! a busy month its gonna be...

BTW, that course will be good...although I did my mass comm from Symbi... but my first preference was this course in creative writing... u can give it a try...

@ RR : There was a time when we had all the time in the world but not allowed to buy books, now we have the books and are looking for sometime to flip thru them...Irony of life I must say..

@ Harshita - Thanks for the kind words dear...Well I am still in that contemplation mood...lemme come out of it!

@ Abhishek - I know people who really read too much..I am just a lil show-off U knw!

hello alok, thank you so much for visiting my blog...
what an interesting place you have here!i've always been fascinated by animation... many of my close friends are animators... so it was a pleasure to read your posts. you are obviously very passionate about what u do. :)

did you like my blog? if you did pls become a follower so that i can share wit u wenevr i write...

and here is something i wrote that you might like. pls check it out and tell me.

i'll be watching this space :) be back whenevr u write...