My DVD Player is again playing games, its either not playing some DVDs or giving some major scratches to the DVDs it is able to play. It gave some Khatarnaak scratches on the Lion King DVD & I can’t express my angst and frustration after I saw the scratches on the DVD.I have decided to throw it away and get a New DVD Player ASAP.

Anyway, recently somebody asked me, “You still see (animated) Films like Lion King…”

What followed was a 45 minutes long debate and the last message she sent was, “I don’t ever want to talk to you again…”

When will Indians (sorry to generalize us here) grow up/evolve as an audience and start understanding things (read animation & comics) properly?

Recently I saw a father taking his kids for ‘Watchmen’. Thankfully the ticket vendor refused to issue tickets for the Kid who was 8 years old & I heard the Father mumbling – “Comics ke upar bani film bachche nahin dekh sakte to kya matlab hai phir…” (Why can't kids see a film based on a comic book?)

This reminds me of a scene from one of my most favorite Shyamalan movie Unbreakable. Elijah Price (Samuel L. Jackson) who runs a Comic Art Store gets annoyed when a rich father wants to buy an original comic art for his four year old kid (comics are for kids, right?). Elijah shows him the door, but after giving him a piece of his mind :

Elijah Price: Do you see any Teletubbies in here? Do you see a slender plastic tag clipped to my shirt with my name printed on it? Do you see a little Asian child with a blank expression on his face sitting outside on a mechanical helicopter that shakes when you put quarters in it? No? Well, that's what you see at a toy store. And you must think you're in a toy store, because you're here shopping for an infant named Jeb.

Anyway (changing the topic, otherwise I’ll go on & on & on…), talking of Watchmen, I recently got something which is real cool from a friend Alan Watts from UK. Alan stays in London and attends almost every book signing there, he has got a collection of Graphic Novels signed by great artists & writers like – Alan Moore, Dave Gibbons, Art Spiegelman et al.

I always drool looking at the pics of signings he posts on his Facebook Profile. One fine day, he made me an offer I couldn’t refuse – He would get me Alan Moore’s autograph this free comic book day. Alan Moore was supposed to sign with longtime collaborator artist Kevin O’ Neill (they have worked together on League of Extraordinary Gentlemen).

I kept on making and changing the list of books I wanted to get signed by Mr.Moore and bugging Alan (Watts) almost everyday.

Just one day before signings Paypal played games and my credit card (yep yep the same infamous credit card of Exuberant Shopper’s Guide fame) also expired. I wasn’t able to get books signed. But Alan was really kind to get me Alan Moore’s and Kevin O’Neill’s personalized signatures on his sketchbook (I have the digital copy, hard copy is yet to arrive). Here are the pics: 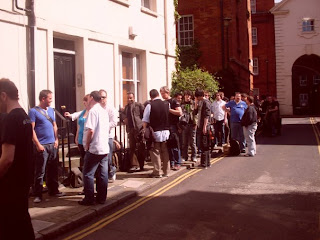 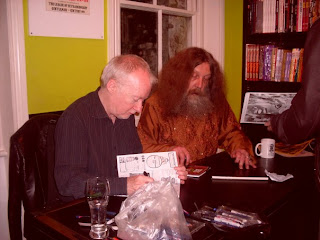 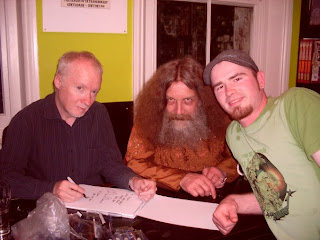 Alan Watts with Mr.Moore & Kevin (Kevin is signing for me in the pic) 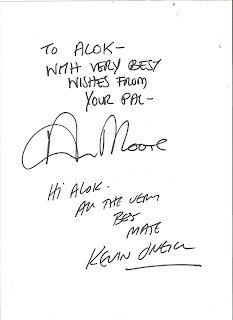 Posted by Toonfactory at 5:40 PM

i know that part. animations are never taken seriously here. they're always associated with the kids and the comics. but they fail to see what goes behind the scenes... in the making of an animation movie... i've always loved animation movies... even Tom & Jerry is a great job done!

congrats on getting those signatures! :)

Congs buddy for those signature...i m sure u will get them framed and hang in your bedroom..:))

And of course I also felt intially that animation is for kids...but after seeing the animated movie and stuff...I cud praise people who are followers of this stuff....

by the way I still watch Tom Jerry once I return from office in evening.. :)

Congrats buddy!!!Big round of applause...
and thank god for that dimwit not talking to u ..(i mean i hope u dont mind too)...i mean how can some one call animation for kids...till date i enjoy animation more than the nromal movies..and im very touchy about Lion King too...so grrrrrrrrrrr for her..
and praises for u...
like chirpy said..get it framed!!

i didnt know how rocking animated stuff is till i married M! and even now i cant "get" it the way you guys do! but i am defi wayy beyond the stage of animation and comic books are for kids! :)

and great stuff about the autographs!